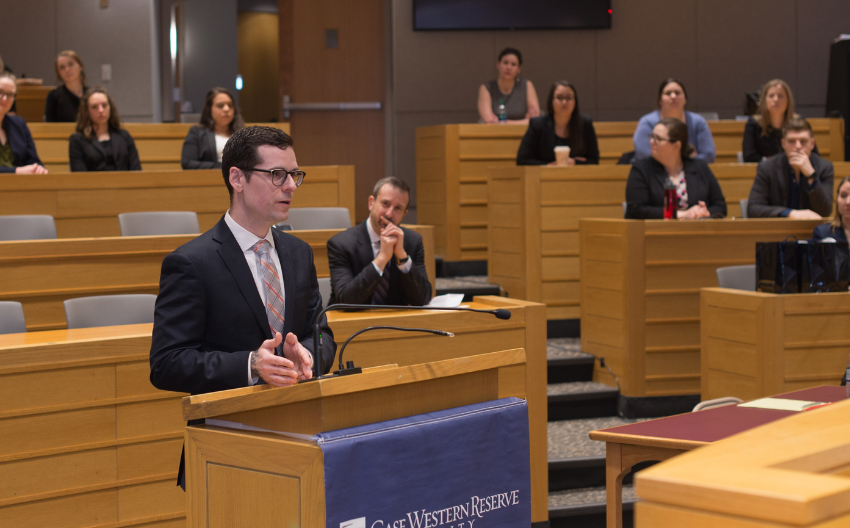 Students who begin their semester in the Appellate Litigation Clinic this fall will have an opportunity few practicing attorneys ever do: they will brief a case to the Supreme Court of Ohio, which last week accepted the clinic’s petition for discretionary review in an important case involving a defendant’s right to withdraw a guilty plea upon discovering information that the state wrongly withheld from him at the time of the plea.

The client had pleaded guilty to involuntary manslaughter following a three-person shooting that led to a bystander’s death. At the time of the plea, the client was not aware of an audio recording of the crime scene that the state had produced under a “counsel only” restriction. The state had imposed that restriction despite no legitimate basis for withholding the recording from the client. Immediately after hearing the audio, the client moved to withdraw the plea, explaining that the audio bolstered his belief that he could establish self-defense.

Joe Shell (LAW '20), who co-teaches the Appellate Litigation Clinic with Professor Andrew Pollis, wrote a petition to the Supreme Court of Ohio, explaining that Ohio courts have developed a plea-withdrawal standard that wrongly focuses exclusively on procedural protections, like the right to competent counsel and a full hearing, and ignores circumstances like those present here, where the client came to learn after the plea of material information that changed his plea calculus significantly. The petition further explained that the only question courts should ask in these circumstances is whether the client sincerely believes that the new evidence makes a difference—not whether the court or counsel thinks so. It is the client’s decision whether to plead guilty.

Shell worked on the case during his time as a student in the Appellate Litigation Clinic in the spring of 2020, along with classmates Vito Giannola, Chelsea Fletcher, Renee Monzon, Emily Peterson and Geneva Ramirez. Paul Willison (LAW ’21) argued the case in the Eighth District Court of Appeals, and his classmates Ian Kim and Josh Rheins helped with research for the petition.

Appellate courts rarely overturn convictions—so the Appellate Litigation Clinic was thrilled with a record of two wins and two losses for the year. Securing Supreme Court review over one of those losses gives incoming students an opportunity to make that record even stronger this fall—and, more importantly, an opportunity to give the client a chance to go to trial, now that he knows about evidence he believes will exonerate him.