This article first appeared in a summer publication related to the university’s response to the COVID-19 pandemic. More articles will appear in The Daily and on the university and school social media accounts in upcoming weeks; visit case.edu/together to see more.

On an average day, the university’s seven-story Larry Sears and Sally Zlotnick Sears think[box] is the site of bustling activity. But life during the COVID-19 pandemic looks anything but normal. As Case Western Reserve’s on-campus operations came to a halt, its 50,000-square-foot innovation center suddenly stood empty of students and visitors. So the team at Sears think[box] did what it does best: innovate.

In a matter of days, staff members turned their focus exclusively to pandemic-related projects, building critical partnerships with health care systems and manufacturers and designing prototypes to meet their needs.

For example: As health care systems around the world faced a shortage of personal protective equipment (PPE), the Innovations team at nearby Cleveland Clinic turned to Sears think[box] to find an immediate solution for creating the clear plastic face shields that provide an extra barrier of protection for health care workers.

“The problem with most 3D-printable face shields, though,” explained Ian Charnas (CWR ’05), director of innovation and technology at Sears think[box], “is they’re difficult to sterilize.”

So, on March 22—less than a week after the university shifted to mostly remote operations—the think[box] team got to work. Having partnered with Bill Rabbitt (CWR ’03; GRS ’06, mechanical engineering), engineering project manager at Nottingham Spirk Design, and Jason Williams, assistant teaching professor of engineering at Penn State Behrend, their prototype of an easier-to-sterilize shield went into production April 10 with companies in Akron, Cleveland, and Erie, Pennsylvania, at a rate of 5,000 parts per day—resulting in more than 125,000 units to date. 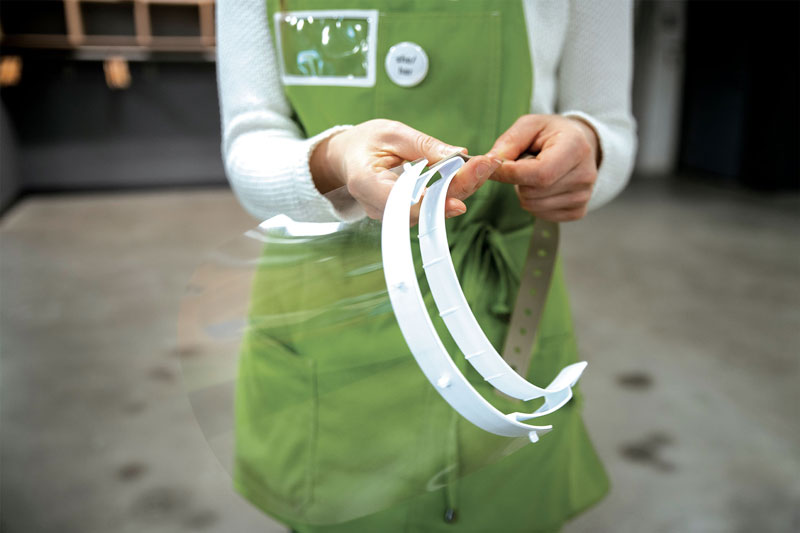 In seeing these efforts, manufacturers including Procter & Gamble and MAGNET, a state-supported manufacturing network in Ohio, realized the prototypes and designs from Sears think[box] were “several weeks ahead of theirs,” said Charnas. So their teams used the think[box] design as a starting point, and produced more than 1 million shields within the first month alone.

The urgency that prompted face-shield production in record time has led to nearly a dozen other projects. These range from hygienic hooks that pull doors open hands-free, to the Cleveland Intubation Box, a collaboration with researchers at University Hospitals (UH) spearheaded by design and manufacturing engineer Mandeep Bansal; director of design and manufacturing Jason Bradshaw (CWR ’02); and graduate student Umit Erol (CWR ’18). The device serves as a barrier between medical staff and COVID-19 patients who are receiving intubation, further reducing the chance for viral particles to spread.

“At the outset of the crisis, the Sears think[box] team immediately offered to partner with us to solve a number of emerging challenges,” said David Sylvan (MGT ’95), president of the hospital’s innovation team, UH Ventures. “They worked tirelessly with us and jointly developed solutions [like the Cleveland Intubation Box] that are being deployed throughout our system on a daily basis.”

In addition to increasing safety, many of the projects simplify processes—often on an incredibly quick turnaround time. Such was the case with the High-LineTM cradle system for IV tubing; in hospitals, health care practitioners must replace their PPE each time they enter and exit certain units, even for tasks as simple as checking IVs. By using color-coded hooks along the wall, IV lines and control panels can extend into the hallway, reducing risk to medical staff and the need to change out PPE.

Cleveland Clinic Nursing and Innovations staff members brought the design for the IV cradles to the Sears think[box] team, who, under the lead of director of prototyping, art, and community engagement Ainsley Buckner, quickly 3D-printed hundreds of the cradles as a short-term solution until Cleveland Clinic’s mass system arrived.

Most recently, the Sears think[box] team partnered with researchers at Cleveland Clinic to create a new device that aims to decontaminate N95 masks in under a minute. The device, known as the Synchronous UV-C Decontamination System (SUDS), is being studied to determine its effectiveness, though preliminary results look positive. While other companies offer large-scale services that sterilize thousands of masks at a time, the innovative design is suited for small- and medium-sized medical centers that aren’t able to safely manage this time-consuming process.

“Companies have not been able to meet the demand for PPE, so in some situations, health care providers have needed to reuse masks,” said Badar Kayani, a BS/MS student in electrical engineering who works at Sears think[box]. “Our device is a point-of-care solution that aims to enable clinicians to sterilize their own masks in the time it takes to remove the rest of their PPE.” 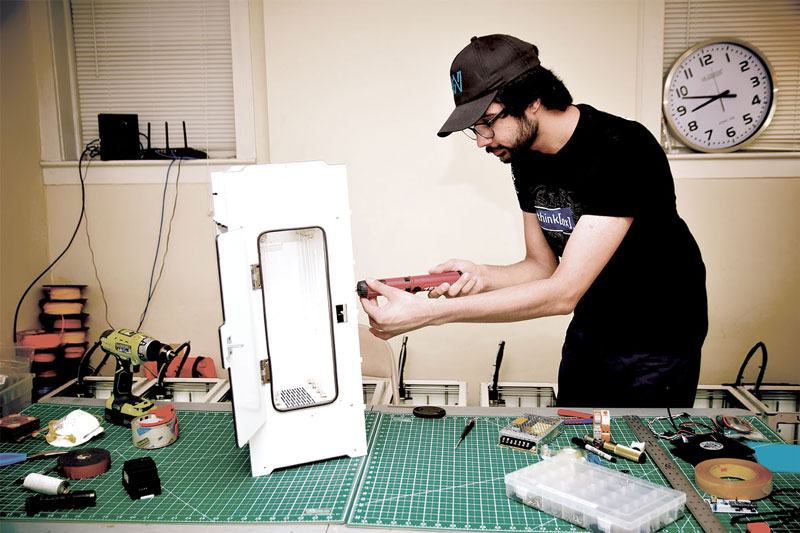 Behind each Sears think[box] project lies hundreds of hours of effort, as staff members have worked tirelessly in the center or from their homes. Their approach resembles that of makerspaces across the country, each stepping up to fill a crucial gap in the national response to COVID-19.

“Those of us in makerspaces are fortunate to be in a position that we have a lot to offer,” said Charnas. “Facilities like think[box] are great spaces to prototype and iterate designs to make workable products that can go to manufacture.”

The best part of the Sears think[box] team’s response? The intellectual property for every prototype they create is shared as open source, allowing anyone to produce the products for just the cost of materials.

“People’s lives are at stake, and the university did not hesitate to prioritize this,” Charnas said. He credits the staff in the offices of general counsel and research administration for the speed with which they’ve put agreements in place, allowing Sears think[box] to get its products to market as quickly as possible, as well as the support of donors such as Miguel Zubizarreta (CWR ’90), whose $100,000 gift launched the Miguel Zubizarreta COVID-19 response fund at think[box].

Above all, Charnas is grateful to the Sears think[box] team for dedicating themselves to this process without a second thought.

“It would be easy to see this as someone else’s job,” he said, “but our university has the type of people who say, ‘We can do this.’”